The final consummation of the human journey—the ultimate fulfillment of our possibility of finding this precious human birth—is the Light Body. Its birth and maturation requires many steps, but its final stage is a process of union, and that means the union of opposites. If we look at our inner and outer worlds, we see that we are a striking study in contrasts and polarities. It is small wonder that we suffer, caught between seemingly irreconcilable opposites. Male-female within the same body, gravity and levity, right and left paths, earth and air, fire and water, active and passive, advancing and retreating, falling down and rising up. Even the most casual observation of a life well-lived shows a dramatic flux in events, inner experiences, feelings, and thoughts. At times we go in one direction and a few years later our path impels us to make a 180-degree turn, forcing one to re-evaluate priorities, goals, and undertakings. This is the nature of samsara, of duality. This well known split is not simply brushed away by talk of “non-dual” states of mind. Until the duality in our body, in our energy fields, and in our cellular structure itself changes, it is all just smoke and mirrors. Here we look at some of the ways in which this union is achieved, while translating these traditional descriptions into a modern idiom that strikes closer to home.

The first polarity that must be resolved is our right-left reality. Without a discussion of the often misrepresented idea of the right intuitive brain and the left logical brain, traditional tantric anatomy makes it clear that our right and left channels, branching from the nostrils down into the lower abdomen, represent a masculine and feminine energy system. This has nothing to do with “gender” as we define it socially or even medically. But just as it is a feature of plants, birds, and bees, it is an essential feature of esoteric anatomy. This hoped-for union is portrayed clearly in Buddhist iconography of the internal channels, as well as the yab-yum or male-female in orgasmic embrace that is present in various deity thangkas. But it is also overtly shown in Western alchemical writings, with a half male, half female figure, as well as the classic Indian representation of the Shiva-Shakti half-and-half body. Many other traditions, including the Christian demonstrate this in works of art, architecture and literature, where its real import is often hidden from the uninitiated. Right-handed and left-handed actions and connotations pervade every culture, even influencing our anatomical nomenclature, the right side being “dextra” as in dexterous, and the left “sinistre” as in passive, hidden.

While a right-left union could take place in many ways, in Vajrayana it is most clearly expressed in the practice of tsa-lung, of working with the energy channels and the vital energies that surge through them. Through visualization and breath control, as well as yogic “magical movements” or trul-kor, these energies are forced down through the side channels to meet below the navel. The right channel, in both Hindu and Buddhist traditions, is the solar (Skt: ida or Tib: roma). The left channel is considered lunar (Skt: pingala or Tib: kyangma). Here we have a strong male-female sense. The Sun energy is forever linked to the concept of the drive and focus of the male archetype. The cool and nurturing female archetype is forever lunar. In Vajrayana this split is also designated as skillful means (tab) and wisdom (sherab), or being in the world versus knowing what is beyond appearances. The union must take place somewhere neutral to these two, or even to the place that unites them. And that is the central channel (Skt: shushumna or Tib: uma), the region of undivided consciousness and luminosity.

This merging requires a number of steps, not only to prepare these three channels, but to bring the entire body on board with the transformation. Channels must be stretched, straightened, and purified, while energies must be condensed and accumulated. Physical yoga accomplishes a number of these, as do a variety of breath practices, such as alternate nostril breathing. The Light Body adept will have already spent years on visualizations, mantras, and work with chakras to bring the biological physical form and bioenergetic subtle body up to par.

Daoist practice has a virtually identical process, with its own unique nomenclature, and indeed a far more detailed and complex bioenergy theory and anatomy. Qigong is largely involved with the preliminary clearing and charging up process, as opposed to neigong or neidan, which is the actual alchemy of change or stage of union. The neidan tu is a complex diagram of the human body as a landscape, with waterwheel, rivers, and furnace, and other symbols, which mirrors more diagrammatic portrayals in the Tibetan and Shaivite systems of channels and chakras.

The two sides of our energy could be joined in the central channel through any chakra, and through various means. There are fast and slow, gentle and intense methods. The most rapid and forceful occurs in the navel area, emanation chakra of Buddhism or lower Dantien of Daoist nomenclature. When that union happens, we begin to unite and resolve our own male-female polarity and its inherently conflicted state.

Anatomically, the prime candidate for the central channel is a small fluid-filled tube at the very center of the bundle of nerve tracts known as the spinal cord. It may also be within the microscopic primo vascular system vessels that we know is all around the cord. The Shaivite system actually describes a number of parts of the central channel, corresponding to the sensory and motor tracks of the spinal cord, the choroid or circulatory layer, and the cerebrospinal canal itself. The linings of the channel and the sheaths around the cord also have conductive properties that contribute to this complex pathway. The cerebrospinal fluid flowing in the cord has extraordinary properties, as a carrier of biophotons and the assortment of neurotransmitters and hormones that it picks up and circulates in the four ventricles of the brain.

The right and left channels should be the anatomical equivalent of the right and left sympathetic chains. From a Western physiology perspective this is our “fight or flight” system that regulates all organs and opposes the parasympathetic system originating in the brain (vagus nerve) and sacrum. Even though there are intricate ways in which these systems interact with the nervous system and brain areas, there is no known division into right and left function in Western medicine as there is on the brain level. And the idea of breathing energies into these channels still faces a huge gap in our understanding of Eastern spiritual knowledge and Western anatomical and physiological knowledge. But certainly, where the mind is focused there is an increase in blood flow, metabolic activity and biophoton production.

But in Vajrayana, the side-to-side union moves directly into the next phase, which is the most profound of all—top and bottom. This process is analogous to the conjoining of the DNA from the male and female seed. In our current state, one could say that this body is in a perpetual state of meiosis. This is the kind of cell division that happens in our sex cells (sperm and egg). Generative cells split in such a way that each has half of the original DNA, so that half of a child’s chromosomes (23 pairs or a haploid) come from the father, and half (23 pairs) from the mother—making our full DNA complement of 46 pairs of chromosomes. In tantric science, this “father” principle or haploid resides in the head, while the “mother” principle dwells in the pelvis. They will only meet again at death—or if we become enlightened in this very life.

The top-bottom union (or re-union) is the essential process of the well known Vajrayana method of called tummo (literally, the fierce mother), and closely allied to both Hindu kundalini and Daoist neidan. Widely taught in the West and the subject of a number of English books, tummo’s origin is in the tantra of the motherland of India, mainly through the scholar-yogi Naropa and female adept Niguma. This is a remarkable “cooking” process that forces a meeting of our upper and lower poles prematurely, either creating a new self within us, or uncreating us, depending on your viewpoint. Here the white crystalline father seed in the head and the female red seed in the pelvis are easily confused with the elements of fire and water. But the symbology here points to something notably different. It is not merely a conjoining of hot and cold, or even male and female. Indeed, the female seed is not fiery, but considered our lifeblood. The heat comes from drawing in energies from other vital channels and forces.

The meaning of this uniting of polarities is best understood by another symbol, one that plays a part in tummo as well, visualized as a base for the pelvic fire. It is the double triangle or dharmadayo, the “origin of all phenomena,” also known as the Star of David in other traditions. It is of course prominent in Hindu traditions and indeed is extremely ancient. If we look at two merging triangles, the lower has a wide base that spreads out upon the earth, infinitely. However, its apex ends in a single point in the brain. The upper triangle is exactly the opposite. It holds a point in the pelvis, barely incarnated. But it then spreads upward to the infinite cosmos. So, this merging of creation and source, evolution and devolution.

This is the classic possible meeting of Heaven and Earth, the most basic symbol of humanity’s struggle to balance their tenuous existence on the physical plane. It appears in indigenous cultures of South America, in ancient Babylon, in the religion of Zoroaster, the pyramids of Egypt and Sumer, and in various motifs and art of the Christian West. But it is a union of the internal heaven and earth, not one of a utopia on earth. It is really the union of pure consciousness and phenomena, the appearance or experience of form. 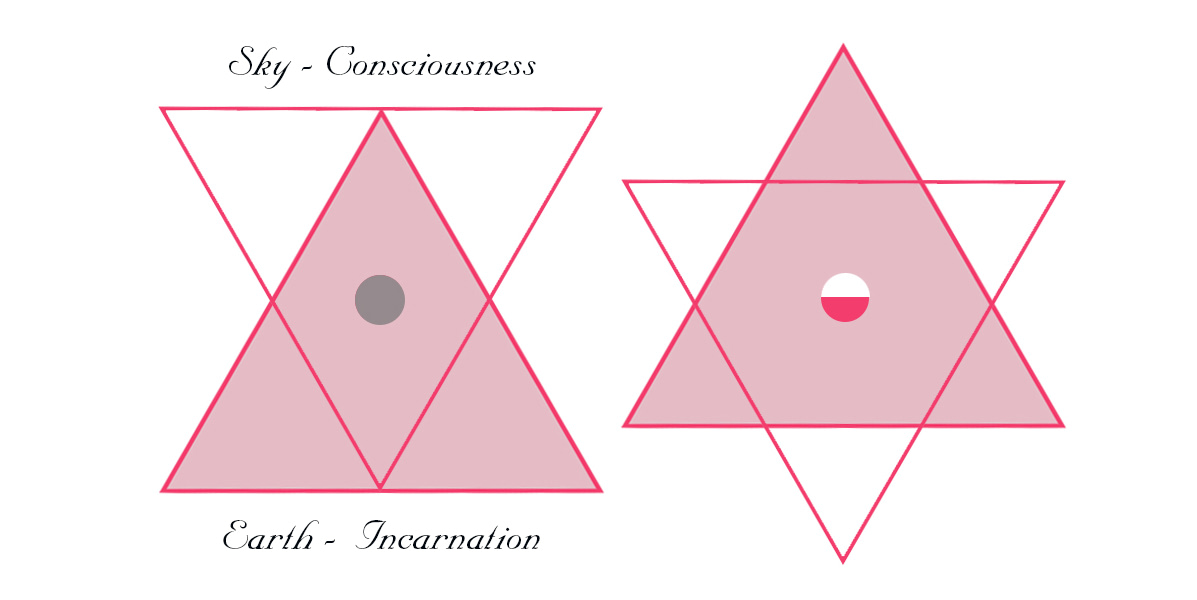 There is still more to unite. Less commonly talked about, the back and front must be brought into balance and resolved, that basic polarity that comes from standing upright, and moving in one direction in space—and in time. And there is the actual cataclysmic union within the central channel. To understand that process we need to expand on what goes on in the navel chakra, the hara, the lower dantien to allow entry into the holy mountain, the citadel, the tree of life, the paradise of myths and dreams. Next month we will look at how that atomic reaction might happen, and what tradition and science polarity between can tell us to make the union of heaven and earth more accessible.

Dixon, J. (2008). The Biology of Kundalini: Exploring the Fire of Life. Lulu Publishing.