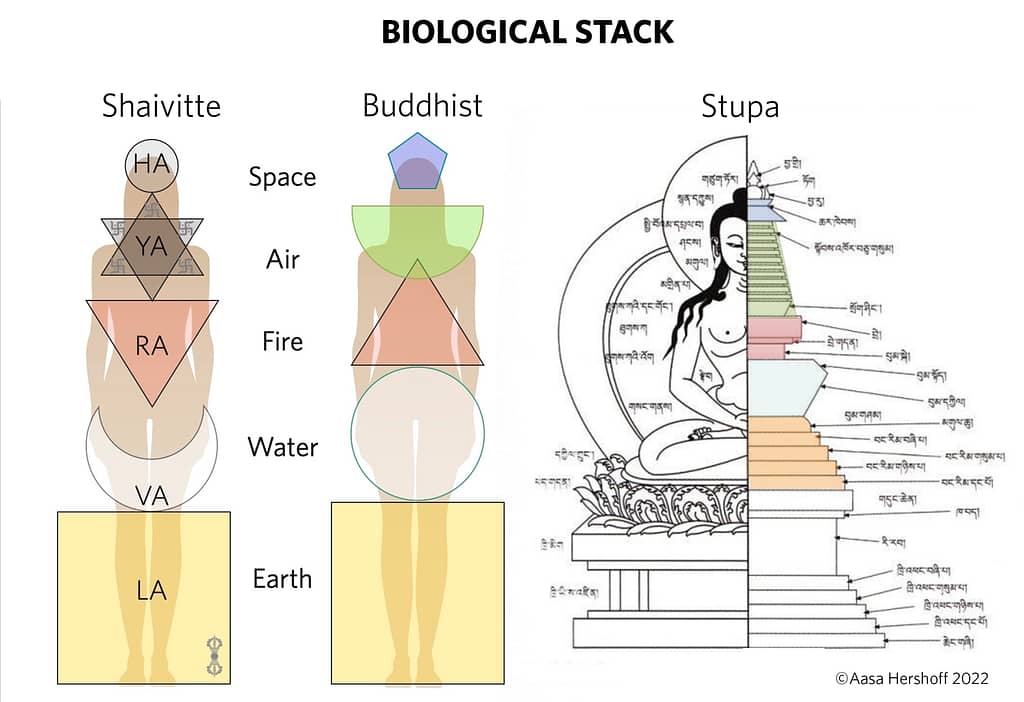 The Mystery of the Dual System of Vajrayana Chakras

The Buddhist chakras, except for a few specific tantras, are described as five in nature. You would naturally expect them to stack up according to their hierarchy, their density, their sequential refinement, just as in the Shaivite approach and their hapless inheritor, the Western New Age chakra system. After all, that is how humans seem to be built. The vertical stack of human anatomy is our natural, biological makeup as our form and function span the gamut, from earth to sky. The stupa or sacred reliquary, found all over the East and especially in Tibet and Japan, echo this arrangement. Below is Earth, then Water, Fire, Air and finally Space. We are installing these elements in the chakras via color, shape, deity, seed syllable and so on. We are fusing a biological stack, the way that chakras exist naturally within us, with an intentional placement of universal forces.

But the tantric path is about building a new body, a new form, one commonly referred to as a light body or rainbow body. The meditations we superimpose (the spiritual stack) on our normal bioenergetic hierarchy (the biological stack) are revolutionary. We are creating a form body that is not just an upgrade or gossamer replica of our biological version. It will have a different anatomy altogether.  Indeed it need not even be a vertical one.

This is visualized progressively from above down, in the head, throat, heart, navel and secret chakras. But the order has changed from our stacked up version we have just described. Now the colors and their signification is quite scrambled up.

In the head center we previously had the blue energy of the Space element. But now we visualize an OM or a white circle, expressing form—Water Element.

In the throat was the green symbol of Air Element. But now we evoke a red AH or triangle expressing energy in all its forms—Fire Element.

In the heart was the red symbol of Fire. Now the blue HUNG circle (a pentagram or circle) of mind appears—Space Element.

In the navel chakra there was a white symbol of Water. Yet now we visualize a yellow SO or square—the Earth Element

Finally, at the navel was the yellow symbol of Earth element. Instead, we visualize the green HA or semi-circle—of Air Element. This is show diagrammatically here.

What does this mean? Why are we meditating on, and evoking powerful elemental bioenergetic forces in someplace other than our bodies natural abode, or sequence? It is vital to note that we are not shuffling the chakras around. It is simply the elements which have been switched. This dual system of chakras is one of the great secrets of Vajrayana. It sits right before our eyes that yet remains unseen. In practice, solving this mystery may not be essential. If we just perform the prescribed meditations with enough diligence and duration, all will transform. But in this case, curiosity has its virtue. Understanding what is actually going on is important for the Western mind, while in the East, knowing that one is earnestly following a tried and true path is usually enough. So let us delve further into this enigma, guided by our insatiable need to understand how things work.

Two possible explanations come to mind, as to why the Buddhist system has a quite different arrangement from both nature and from the other systems. These answers are not found anywhere within tantric literature, nor the oral tradition that I have encountered in forty years of involvement. Certainly the sequence of body, energy (speech), mind, qualities and activity relate to the kayas or Buddha bodies, specifically, Nirmanakaya, Sambhogakaya and Dharmakaya and Svabhavakaya (the total of the previous three). But this only muddies the water further. A more logical sequence, and one that conforms to the three fold division of Daoists and Shaivites, is the form body in the lower field, energy in the middle field and mind or consciousness in the upper field. The following explanations are a theoretical attempt to grasp the deep significance of the spiritual stack, though approached from two very different perspectives.

And now dear readers, please feel free to add your explanations, theories, observations and insights in the strange case of the dual-system of Buddhist Chakras.

(The above is partially extracted from Asa’s forthcoming book, “Chakras: True, False & Secret.”